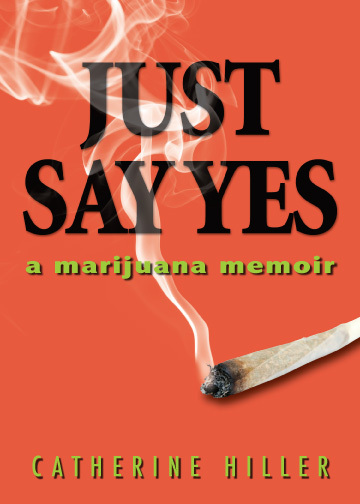 Click on the link below to purchase the book

This may be the first marijuana memoir ever published: a look at a life through a cannabis lens. As someone who has smoked weed almost every day for decades, the author has produced an entertaining and positive narrative about long-term cannabis use: "Weed is the spine of this memoir, as drink is the center of so many others." Hiller describes climbing filthy tenement stairs in NYC to get her bi-monthly supply, giving advice about grass to an octogenarian couple, going to the Burning Man festival, filming Paul Bowles, smoking pot in the Caribbean, interviewing John Updike about marijuana, and being among the film crew at Woodstock. With ruthless honesty, she observes weed's effect upon every aspect of her life: marriage, motherhood, friendship, work, sex.

"This funny, wry, and very candid memoir purports to be a Confession of an American Pot-Smoker but is really a meditation on the way we were and a cultural/personal history of the past fifty years." -- Phillip Lopate, essayist, Nonfiction Director MFA Writing Program, Columbia University

Catherine is happy to share the beginning of her book, as published as a Private Lives piece in the New York Times.

The book, Just Say Yes: A Marijuana Memoir, was published on 4/20/15, National Weed Day, and can be bought through Amazon.

After the book's publication, Catherine heard from hundreds of cannabis users from around the world. She continues to advocate for a sane, guilt-free approach to marijuana.